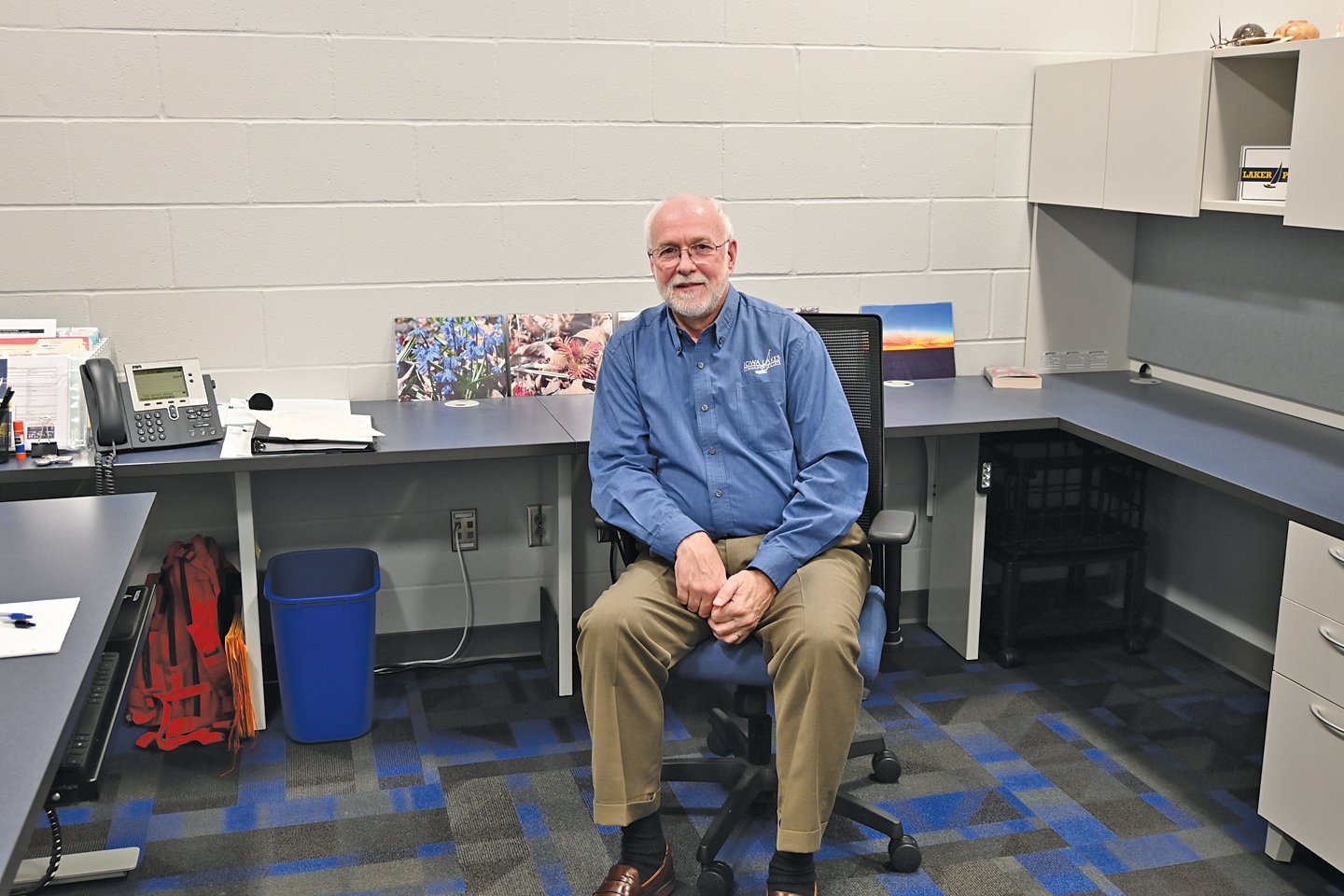 Tom Brotherton will step down as the Dean of Iowa Lakes Community College’s Emmetsburg campus on June 30. For 18 years he has overseen expansions, building updates, student enrollment and technology advances.
“If you stay in an institution for a period of time you begin to rely on the predictability of the work. I was never looking for comfort,” Brotherton said about his career choices.
Tom Brotherton’s pathway to Iowa Lakes Community College started in the Shelby-Tennant school system where he taught advanced sciences to 6, 7 and 8th graders for six years. After that he headed to Southwestern Community College in Creston, Iowa where he served as the Director of Arts and Sciences.
Once in the community college system, he continued to advance. For twelve years he was in the classroom at ILCC teaching biology, micro biology and zoology. Then came his position as Dean of ILCC. Brotherton never considered himself a big change agent but consistent expansions and improvements have occurred for the better over the years.
The current building where his office is located was originally open in the middle as a type of courtyard when he started as Dean. It was cold in the winter and hot in the summer and did not function well. Eventually this led to the only bond issue in fifty years of the college that changed the way the students and staff interacted. Today there is a specified student service center. Instead of students going from room to room to pay fees, sign up for classes, inquire about student aid or any other need, every service and the staff are in one area. This is a more welcome atmosphere and students quickly become familiar with the staff who can assist with their needs. Brotherton described it as a better way to build a team.
Funding for community colleges was a struggle in the beginning of these institutions. Brotherton credits State Senator Kibbie from Emmetsburg who was instrumental in putting into place that community colleges would be funded one-third from tuition, one-third from property taxes and one-third from state aid. Over the years the state aid portion fluctuated. In recent years it has been somewhat better.
Other changes during Brotherton’s tenure include adding Cosmetology, building the classroom and lab at the college farm, adding a hospital simulation area for nurse’s training and upgrading technology infrastructure. Funding sources for these improvements have come from federal grants and the Palo Alto County Gaming Development grant program.
One of the challenges that many community colleges and universities face each year is enrollment. It was no different for Brotherton. “It constantly fluctuates. When enrollment is high the question is do we expand programs and hire more staff. It is bothersome because there are students involved and we want to always do the best for them,” he said.
Working with the staff at ILCC has been rewarding for Brotherton. He is complimentary of the people he has worked with over the years.
Brotherton attended college at the University of Iowa and later at the University of Nebraska at Omaha. When asked who he favors during the football season he quickly responded, “The only thing red in my life was a car that I had when I was younger.” At one point he purchased season tickets for the Hawkeyes football season. That year their record was 0-11. He has yet to purchase any more season tickets.
Life after a full career can sometimes be challenging. Brotherton seems to already understand that and is ready to take on that task. He is a photographer and has recently purchased a digital camera. His photographs are already frame worthy. He also enjoys working with plants and will be repotting numerous ones this spring. After June 30, all of his decisions about the future will also depend upon his family.
As Brotherton clears his office and leaves ILCC, he can be assured that he made choices that were good for the students, the community and ILCC.